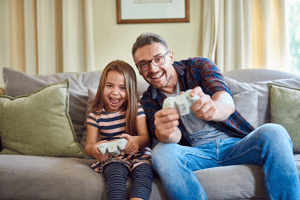 Games are often dismissed as idle or wasted time. Research findings paint a different picture, with most considered to have a range of small benefits, while others are hugely beneficial.

My recent experience with Minecraft has made me a believer in the benefits of games to our future leaders, technicians and communicators.

Our children's future careers will be very different from our own.

As an educator and a father of a 7 year old, I often wonder how I can best prepare her for the future.

My daughter saw some YouTube videos about Roblox and found her way to the Microsoft Store and asked if she could have it.

After looking at Roblox I decided that there were child safety concerns in having a 7 year old available for online chat, and that we'd be better served by running our own family Minecraft server.

So on Saturday night I installed the Java server on my desktop PC, and I paid for and installed the Minecraft client software on both of our computers.

By the time I woke up, she'd already been playing online and experimenting - her only lesson was an hour or so with her cousin's iPad a couple of months ago.

I started up the server and got her connected (a local server has big performance benefits, and avoids the safety risks of having a child on a public server). A little while later I joined her.

"Immediately she and I were plunged into a world of maths, geology, orienteering, art and science."

I disabled the aggressive critters so we could learn the world around us first, as both of us were quickly dispatched by the local predators.

We collaborated with each other across the room, building a dirt hut for shelter near our starting point, discovering how to make tools and refine resources, and not long after started building a more permanent home on a mountain plateau.

She used teamwork skills, and even challenged me on some of my building plans. I had to remind myself that I need to let her take charge as much as possible, rather than being the parent in-game as well. I'm grooming a future project manager here!

I had jobs about the house to do, so at times she was on her own. On my return I found a walled garden full of vivid poppies, other structural improvements (she used my raw glass as glass bricks), and touches of pink about the place.

For our first ever day of Minecraft we achieved some marvellous outcomes.

I now have a wonderful opportunity to play, learn with and wonder at the cognitive leaps made by her amazing mind.

It also gives me great leverage to keep her active and contributing with her chores around the house, by having her earn screen time.

"Under the surface Minecraft is a lesson in programming logic and problem solving."

International coding advocacy group “the Hour of Code" lean heavily on Minecraft to ignite the programming bug amongst our youth. Check out https://code.org/minecraft to have a try yourself.

Microsoft bought Minecraft and its parent company Mojang in 2015 for a whopping 2.5 Billion US dollars. While the game is obviously profitable, it also trains future employees in any number of STEAM careers (Science, technology, engineering, arts & mathematics).

The recommended age is 7 years old and it can be played on a PC or Mac, Android or Apple tablet, or on Xbox and PlayStation game consoles.

Going forward, I'm going to let my daughter pick the direction we want to go in the future. Should we back to survival mode and develop our problem-solving skills, or do we stay in the safety of sandbox mode and create amazing things?

Wherever it takes me, I'm just enjoying the experience of sharing these magic "lightbulb" moments with my creative little girl.

Join Diamond IT on social media to follow our articles on hardware, software, networking, security and the personalities of Diamond IT.